We Changed Our Name

On May 13, 2016, we changed our name from Hugs for Homeless Animals to Hugs Society.

Why did we change our name?

Over the last 20 years, the question about the name of our organization has come up over and over again in our board meetings. One of the issues with the name "Hugs for Homeless Animals" was that it felt limiting in scope and we had so much that we wanted to do.

Why did we change our name now?

On April 30, 2016, we rescued a cat from an abusive and severely neglected situation. We did not know his name so we named him "Gabriel" (The Messenger) and started our fight for his life. Since we are not a rescue organization, this event brought an incredible learning experience to us. On May 13, 2016, we were able to get him out of the animal shelter and into our care. It was determined that that day was a changing point and we would officially change our name and start anew. 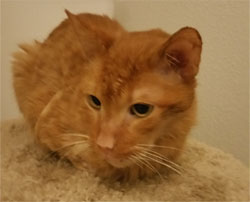 We wish we had a good story to tell about how we saved Gabriel and he had a long happy life -- but, unfortunately, we can't. He had a hard life so full of abuse and neglect that it ultimately affected his quality of life. He was extremely underweight from being starved. He was covered in feces. His teeth were so infected and broken that they all had to be removed. But this didn't tamper his spirit. He would talk to you and wait for your response so he could carry on a conversation. He loved the sunshine. He loved head butts and cuddling. During the dental surgery, it was discovered that he had a tumor and a biopsy was done. The biopsy showed that he had bacterial osteomyelitis in his jaw and a squamous cell carcinoma in his cheek. All of which could have been avoided if he had been loved and cared for before. On May 23, 2016, after a confirmation of life expectancy, we had to make the very difficult decision to end his suffering. He is now running free in Kitty Heaven and his ashes rest along side the other loved and never forgotten. It is a very sad story that we need to tell about Gabriel, but we know that in the end he came to know love and caring and safety.