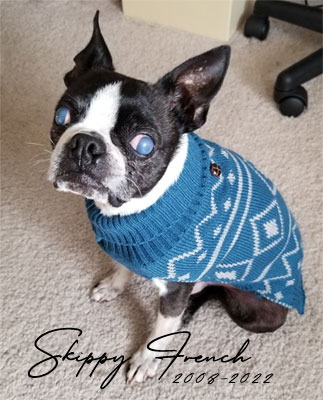 Skippy was a very good dog. Oh, more than that. He was an exceptional person. He was a character with a mind of his own and more smarts than I have ever witnessed in a dog before. He would surprise me with how much he understood and even more so in how he made himself understood. Every expression was right there on his face.

Today the house is so quiet, extraordinarily quiet. It isn't that he was noisy; no, not at all. It is something else. A heartbeat is missing. He did have an unusual heartbeat. Yes, he had a murmur but it was not like any murmur you've ever heard before. His heartbeat was like ocean waves on a rugged cove or maybe like a drummed message from a distant land. A rhythm unique to him alone.

Sadly, age began to take its toll and he had to leave us. Skippy has now gone on to the Rainbow Bridge but not without a final goodbye. Last night during the moment between wake and sleep, he came to me. Bounding in his rambunctious way and stopping spread eagle and looking up at me with "Want to play?" He made me laugh one last time. Skippy was a treasure. I now understand why my dear departed daughter (his mama) called him her little man. I miss him dearly. I will hold him forever in my heart and am grateful for every single moment I had with him.