Humane Societies: A Voice for the Voiceless

"Would you please stop that? I've told you a thousand times not to poke your nose there!"

He's anxious to tell folks National Pet Week is May 4-10. It's a great time to recognize the incredible benefits pets bring to our lives and refuel efforts to support local animal shelters and humane societies.

Every morning as I strain putting on shoes, Hank sticks his head between my chest and arm. I scratch his soft, fuzzy ears, and he nuzzles his warm nose against me while licking my bicep. It's Hank's way of thanking me for selecting him that fateful day at the animal shelter. He's also reminding me if the front door doesn't open in the next 60 seconds bad things will happen.

"No, you don't need to go outside -- you were just outside."

What do Salem OR, Boulder CO, New York NY, and Dillon MT have in common? Well ok, technically they all have oxygen. They also have often forgotten, under staffed, and under funded animal shelters. Places manned by kind souls whose unified concern is the welfare of critters (and who cleaned the litter boxes last). Shelters are the only hope for some domesticated animals.

Hank always has a few choice words to say (he picked them up from my wife) about the dry dog food I feed him. But I tell him that's nothing compared to the atrocities (Michael Vick not withstanding) facing domestic animals daily. Pets are, for the most part, helpless against abuse -- depending on their human caregivers to supply life's essentials. Sadly, that doesn't always happen.

Who is the voice for the voiceless? Animal shelters! That's who! They play such a crucial role for urban and rural communities -- offering a safe haven for animals until a caring home can be found.

"Quit pushing that noisy squeaker into my leg! I'll play when I'm finished."

Most shelters are a crowded collection of cuddly furry creatures. Like Hank, they want roast beef and mashed potatoes for dinner but all would settle for being given a chance in a good home. Through the indispensable help of unselfish community volunteers, shelters offer many services including: training workshops, adopt-a-thons, foster care programs, and sterilization clinics.

"Stop whining, it didn't hurt much. You're still a macho dog with a baritone bark. "

The shelter was my threat of choice as Hank was growing up. When he chewed up new shoes or, cocked his head then peed on the living room carpet, I'd scold, "You stupid dog, you're only seconds away from getting sent back to the pound!"

Back then, Hank thought I meant business -- when in reality, I know adopting a shelter animal is a long-term commitment, not some fleeting adventure that ends when caring for a new friend grows old. Like the millions of other pet owners, my commitment to Hank continues paying big dividends like:

I have nothing against cats. Our orange tabby kitten, Dudley, is a blast. An animal shelter adoptee with oversize marble eyes ­ fully equipped with a bonus push-button tummy. You push it and he'll roll on his back without a trace of modesty, knead the air, and purr like a motorboat.

"I know Dudley's your bud and he lets you chew on him. What else are friends for?"

It's everyone's responsibility to ensure support for animal shelters and the essential services they provide for our communities. Find out how you can assist animals in your area by volunteering at your local shelter. You'll make some pretty cool friends ­ both two- and four-legged. You might also find a canine friend like Hank. 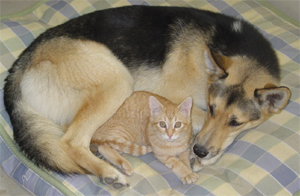