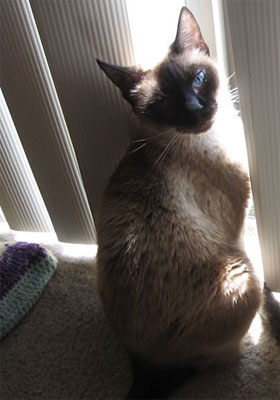 Ladi Siam (Mama) started it all. Her story is well documented in our history. We like to look at it as Mama changed the world for homeless and displaced animals.

She came to us homeless and pregnant. We gave her a loving home and she gave us a family, a community, and a cause to make a difference.

Everyone came first for Mama. When Sebastian went blind, she became his eyes and his constant companion. She made sure that everyone else had their meals before she would eat hers. She was the purveyor of hugs and kisses to any cat who needed comforting. She was the most giving person I had ever known.

All these years she would not give up her timidness to humans, even me. For instance, I could pet her with one hand but not two, and lifting, well, that was pretty much out of the question. It must have been a protection mechanism from a time before us. However, in this last year she decided to change. She expressed more of her own wants. She became more vocal and outgoing. She would even ask to come up in my lap or to sleep with me or to share a bite of my dinner -- much to my delight.

Sadly, age began to take its toll and she had to leave us. She now rests with the angels and I'm sure has met up with all of her loved ones who have gone before. For us who are left behind, we will hold her forever in our hearts and are grateful for every single moment we had with her. She was an example of how we should all live our lives.

* In the picture, it looks like she only has one eye. It is only the lighting. Mama had two gorgeous blue eyes.